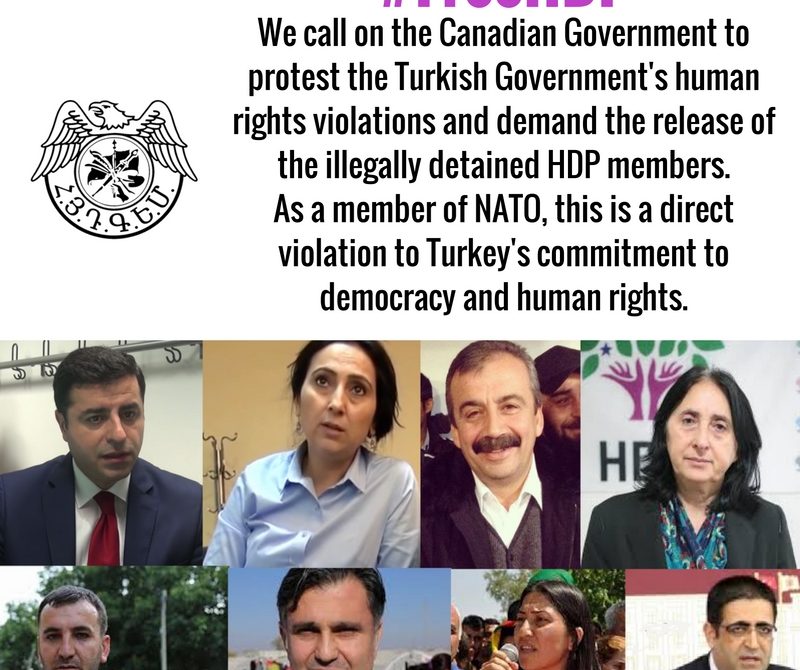 On November 3, 2016, Turkish authorities raided the houses and illegally arrested the party’s co-chairs Ms. Figen Yüksekdağ and Mr. Selahattin Demirtaş; 9 other HDP MPs were also arrested as part of an on-going crackdown against the opposition and civil societies in Turkey.

“As a member of NATO, we expect the Turkish government to uphold NATO’s integrity by practicing human rights and democracy. What Erdogan’s regime exhibited on Thursday, was in direct violation of that,” said Mirna Foudoulian, President of AYF Canada.

The HDP, or the People’s Democratic Party, is the third largest political party in the Turkish Parliament. Ever since its election in 2014, the HDP’s platform remains unchanged as a party that promotes ethnic co-existence, democratic values, and minority rights. The HDP has been a strong voice against Erdogan’s government and is the only Turkish political party to publicly acknowledge the Armenian Genocide.

“We feel compelled to speak up against the recent actions taken by Erdogan’s regime as a youth organization that upholds human rights and democratic values. We must urge for international pressure to condemn the actions taken by a supposed democratic government and demand the immediate release of these MP’s,” said Foudoulian.

Founded in 1934, the Armenian Youth Federation of Canada (AYF Canada) is the largest and most influential Canadian-Armenian youth organization in Canada. AYF Canada works to advance social, political, educational, and cultural awareness among Armenian-Canadian youth.