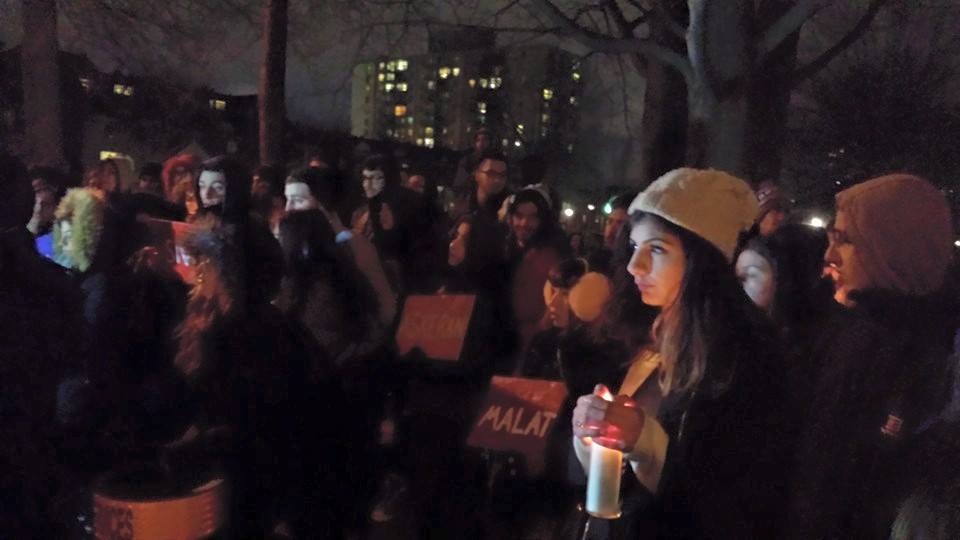 APRIL 23, 2015
HUMAN RIGHTS ACTIVISTS GATHER FOR A CANDLE LIGHT VIGIL COMMEMORATING ARMENIAN GENOCIDE CENTENNIAL
To mark the centennial of the Armenian Genocide, human rights activists from Ottawa and across Canada gathered on Thursday, April 23 to hold a vigil in memory of the victims of all genocides that have taken place throughout the past century. Hundreds representing various organizations were in attendance starting at 7:00pm at the Canadian Tribute to Human Rights.

Armenian Youth Federation (AYF) Canada Central Executive member Mirna Foudoulian described the importance of bringing together all these organizations. “In marking the centennial of the Armenian Genocide, it was important to not only remember the 1.5 million victims of this heinous crime,” Foudoulian explained, “but we also wanted to send a strong message and stand united against all genocides with the goal of finally making ‘Never Again’ a reality.”

Holocaust survivor Dr. Raoul Korngold and Rwandan Genocide survivor Willy Marcel Rangira shared their stories of survival and perseverance – outlining the gruesome realities of genocide and the transcending effects it has on future generations.

Representatives of the AYF, Rabbi Steven from Jewish Federation of Ottawa and the President of the Student Federation of the University of Ottawa were amongst those addressing the audience.

Several diplomats, including the Ambassador of Armenia and a representative of The Vatican embassy, were present.

The participants held candles in memory of all those who have fallen victim to genocide throughout the past century. They also placed flowers at the human rights monument in their memory.

The Armenian Genocide, which began on April 24, 1915, was the planned extermination of a million and half Armenians at the hands of Ottoman Turkey. More than two million Armenians were forcibly taken from their homes and villages, men drafted into and murdered in the Ottoman Turkish army, and women, children and the elderly driven into the Syrian deserts where they were starved, beaten, raped, drowned, or burnt alive. Survivors ended up in orphanages and refugee camps across the Middle East and the West. 150 of the genocide orphans were brought to Canada starting in 1923 in what became known as Canada’s Noble Experiment.

Founded in 1934, the Armenian Youth Federation of Canada is the largest and most influential Canadian-Armenian youth organization in Canada, working to advance social, political, educational, and cultural awareness among Armenian-Canadian youth.