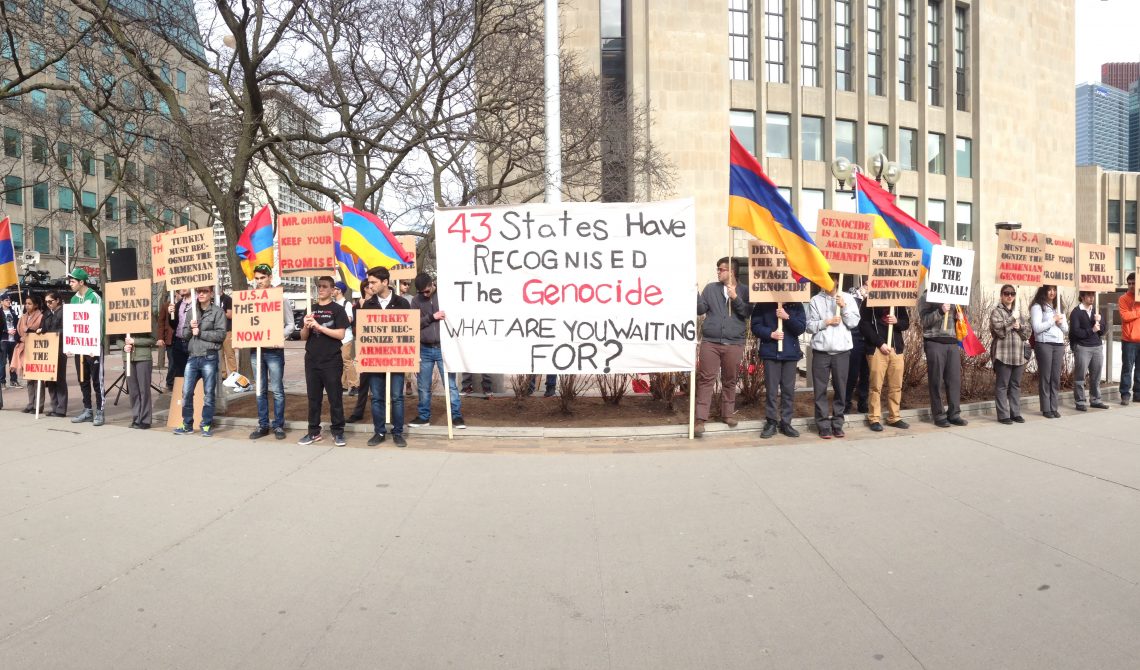 TORONTO (AYF CANADA) – On Apr. 16, the Armenian Youth Federation of Canada (AYF Canada), in collaboration with the Armen Karo Student Association, held a protest at the United States Consulate in Toronto, demanding that the US government recognize the Armenian Genocide.

To date, 43 U.S. states have recognized the Armenian Genocide. Successive US presidential administrations, however, have avoided using the word ‘genocide’ due to pressure from the Turkish government, who continue to deny that there was any intention to exterminate the Armenian minority of the Ottoman Empire.

On April 12, 2015, Pope Francis celebrated Sunday mass in the Vatican to commemorate the centenary and referred to a 2001 declaration by Pope John Paul II stating that the Armenian Genocide is “widely considered the first genocide of the twentieth century.”

Prior to his election to the oval office, President Obama promised to properly characterize Ottoman Turkey’s murder of over 1.5 million Armenian men, women and children between 1915 and 1923 as genocide. In a January 19, 2008, statement he wrote: “The facts are undeniable. An official policy that calls on diplomats to distort the historical facts is an untenable policy. As a senator, I strongly support passage of the Armenian Genocide Resolution (H.Res.106 and S.Res.106), and as President I will recognize the Armenian Genocide.” President Obama has yet to honor his pledge. He is expected to make a statement onthe topic on April 24, 2015, the international day of commemoration of the Centennial of the Armenian Genocide.

The Armenian Youth Federation of Canada hand delivered to the Consulate a letter which called upon “the US Administration and the US Congress to appropriately recognize the Armenian Genocide” and that they “counsel Turkey to acknowledge the Armenian Genocide and to initiate comprehensive measures for reparations for material and non-material losses and for restitution of the territorial property rights of the Armenian nation.”

“On the centenary of the Armenian Genocide, Mr. Obama has the choice to stand with the likes of Prime Minister Harper, Pope Francis, the European Parliament and multiple NATO nations who have all taken principled stands against genocide denial and properly use the word ‘genocide.’ Or, he can continue to comply with a gag rule imposed by a foreign entity, self-censor his administration and himself and enable genocide denial. Only through clear condemnation of these crimes by the world’s leaders can we ever hope for peace, justice and work for prevention of future occurrences of genocide,” said Keskinian.