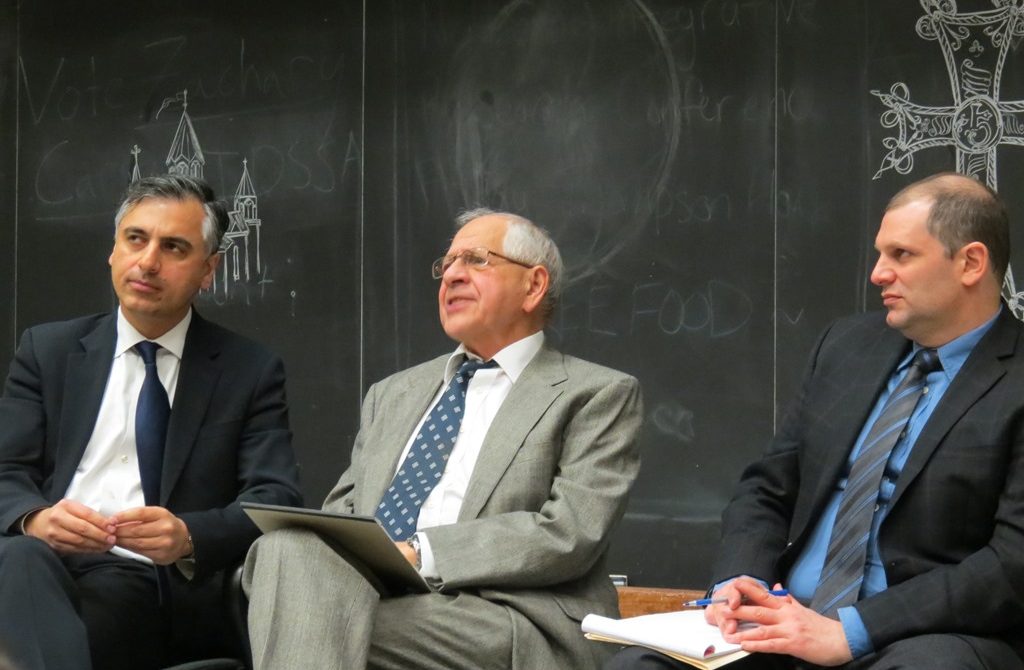 CONFERENCE ON GENOCIDE: PREVENTION TO JUSTICE AT MCGILL UNIVERSITY

CONFERENCE ON GENOCIDE: PREVENTION TO JUSTICE

MONTREAL, CANADA – Room 132 of the Leacock Building of McGill University was packed with people present to hear 3 important figures and pioneers of Human Rights; Dr. Payam Akhavan, Dr. Henry Theriault and Dr. Frank Chalk. Of the 500 attendees, we had several different nationalities, such as Armenians, Rwandans, Indians, Greeks and Ukrainians to name just a few.

The conference was hosted by Kevork Kazanjian, Chairman of The The Armenian Genocide Centennial Youth Committee of Canada. He mentioned that the key to Genocide prevention is the punishing of the perpetrators of Genocides and that Justice is crucial in creating peace and preventing future genocides. Kevork invited the first special guest Ted Bolgar, a Jewish Holocaust survivor who put the emphasis on hope. He had read, in his concentration camp, The 40 Days of Musa Dagh by Franz Werfel and hoped to survive, like the Armenians had. “It is thanks to this book that I survived” he said.

The second special guest was called to the podium, Ms. Leontine Umubyeyi, survivor of the Rwandan Genocide. The only survivor of her family, she explained her difficult journey during the genocide that finally brought her to Canada.

Then, Dr. Theriault covered the issue of Armenian Genocide reparations. He described that these can be of financial or territorial nature; and can cover individual or collective claims and those of the Republic of Armenia. “The year 2015, he said, is just a number. The fact that we’re commemorating the centennial of the Armenian Genocide does not mean we stop the work that has been started. We will continue our path. Reparation takes the mere will of the perpetrator; it is essential for rehabilitation of Turkey.  Time is not running out for Armenians; time is against Turkey.  For 100 years, they have lost the opportunity to get out of denial; there is still time for Turkey to repair damages.”

Dr. Payam Akhavam explained the trial of Dogu Perincek vs. Switzerland; the 2013 judgment of the European Court of Human Rights concerning the freedom of expression of Dr. Dogu Perincek who was convicted by a Swiss court for publicly disputing the existence of the Armenian Genocide. He followed by stipulating that anti-Armenian books in Turkey are against human rights and can be brought to court.  “By denying the Armenian genocide since 100 years, Turkey is holding its people hostage.  Instead of putting this terrible event behind through recognition. Their past is haunting their present.  Although it is a Human right issue, this Genocide is also a problem of the Turkish Society.   Turkey needs to bring the problem where it started… back to its society, to Turkish Court…” he added.

Finally, Dr. Frank Chalk focused on the prevention of genocides. If the Ottoman Empire would have been found guilty of genocide in 1919-1920, we would all be in a different conference today, one focusing on prevention rather than reparation and justice. “The 100th anniversary is an opportunity for all of us to come together and care about Human Right issues.  Perpetrators deny because they are afraid of appearing before International courts.” He said

The evening ended with a very interesting question period. “This conference was one of the best academic events about genocides in the history of Montreal”, “Impressed by the number of people and young people in the audience” are some of the positive reactions from the attendees and speakers, which prove a successful conference.